Dear Fellow Patriots, Last week I asked for your help in kicking off the Campaign To Awaken The Church. This week we launched it with my first video which you can see on our Facebook page and my new YouTube channel. Within 50 hours this video was viewed by over 105,000 people. It has gone viral. We have not spent a dime paying to advertise it. Your donations will help it be seen by hundreds of thousands more. I’ve just returned from my first trip to the battle ground state of 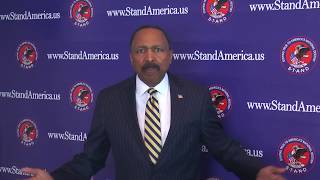 Take a STAND by donating today to help us get this video out to everyone we can. It's going viral. Let's keep it going! DONATE TODAY

Dear Fellow Patriots, I founded STAND on July 9, 2009, six months after President Barack Obama took office. He promised the “fundamental transformation” of the United States of America. He almost got the job done, and had Hillary Clinton been elected, America as we have known it might have been lost forever. While I know that it took millions of Americans praying, working and sacrificing to pull our country back from the brink, STAND played a vital role. We exposed the lies a

Lawlessness Is Not Compassion

The Evil of Critical Race Theory

The Evil of Critical Race Theory

God or Marxism? Unity or Division?